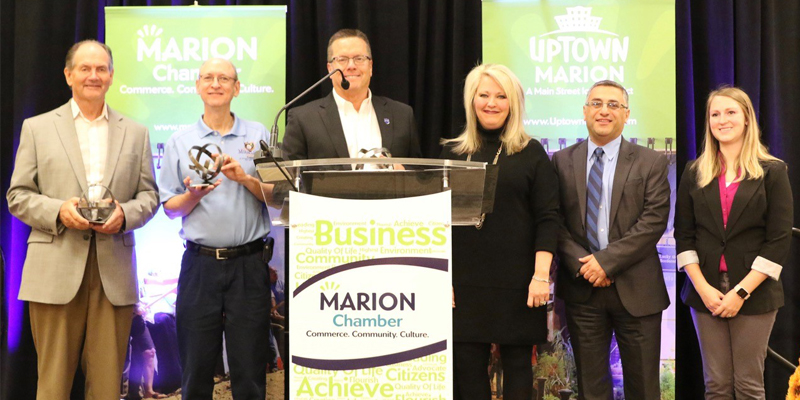 Prospect Meadows and the Kiwanis Miracle League were honored Wednesday as the first recipients of the Marion Community Impact Award.

The award, sponsored by the Marion Chamber of Commerce and the Marion Times, was presented during a luncheon at the Marriott Hotel in Cedar Rapids.

The award was previously called the “Citizen of the Year,” but the named was altered this year to reflect organizations that have made a positive impact on the Marion community.

Jill Ackerman, the president of the Marion Chamber of Commerce, saluted the three men and their organizations for making a “monumental impact” on the community. She cited their “outstanding work and accomplishments” this past year.

Strellner announced that 450 travel teams participated this year at Prospect Meadows, which opened in late May. Those teams and fans occupied 5,000 hotel rooms and pumped $3 million into the local economy, he said.

Strellner said they anticipate having more than 1,000 travel teams in 2020 with $6 million in direct spending. In addition to the weekend travel teams, he stressed the importance of serving local teams with night leagues during the week.

Strellner paid a special tribute to Roeder, the former general manager of the Cedar Rapids Kernels who was the primary driving force in building Prospect Meadows just north of Marion.

Strellner also cited the support the facility has received from local governments, businesses and individuals. He said Prospect Meadows is just getting started, with plans for eight more fields to join the nine fields already in operation.

Ackerman, who has helped promote Prospect Meadows, turned to Strellner and Roeder during the ceremony and said, “Thank-you for your perseverance and passion for making Prospect Meadows a reality.”

The local Kiwanis Clubs of Marion, Cedar Rapids and Hiawatha joined forces to help create the Miracle League, which featured four teams and 42 young individuals this year. The Kiwanis Clubs have pledged $300,000 to the project and are looking to expand the program in 2020.

The Miracle League has proven to be a heartwarming project for the players, families, fans and organizers.

“If it doesn’t tug your heartstrings,” said Strellner, “you don’t have a heart.”