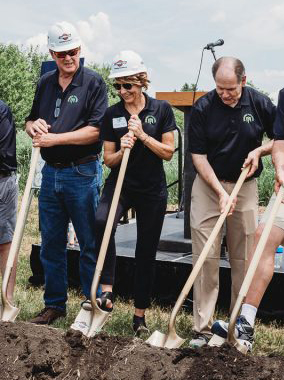 In 2010, a local businessman by the name of Rick Freese approached retiring Cedar Rapids Kernels General Manager Jack Roeder about an idea he had.  The idea was to build a world class baseball/softball complex in Linn County.  Both men had traveled to numerous complexes across the country to watch their grandsons play in Perfect Game events.  They wondered, “why can’t we build something here?”  From that conversation the vision for Prospect Meadows was developed and steps were taken to make Prospect Meadows a reality.

In 2011, a Board of Directors was formed along with the creation of a 501©3 non-profit entity.  The wheels were officially in motion.  A feasibility study was conducted and found strong public support for the complex.  From that study the Linn County Board of Supervisors had the foresight to get behind Prospect Meadows right away.  They signed a 95-year lease agreement with Prospect Meadows for 128 acres of land north of the Cedar Rapids/Marion area for construction of the complex.  The cities of Marion and Cedar Rapids have also pledged their support of Prospect Meadows which helped to get the momentum going.

A fundraising committee was formed to raise funds for Prospect Meadows.  The fundraising effort includes many entities in both the public and private sector.  From 2012-2018, the Fundraising Committee raised a total of $11.75 million to build Phase 1 of Prospect Meadows.  To date, the private donations total $5.9 million and the public donations total $5.85 million.  Prospect Meadows is truly a public/private partnership!  With enough money to start building, major grading and earthwork started in 2017 with the official grand opening of May 23, 2019.

Prospect Meadows was an idea that was first conceptualized on a napkin at Granite City, to the reality of opening in May of 2019.  We could write a book about all the great people and organizations who have supported us to get to where we are today.  We thank everyone who has helped us get to this point and those who continue to support us through operations!